I'm already behind in this project. Reason is I got completely thrown off by holidays. No Post days and the feeling that I had time. Which I don't have. But the letters are trickling out and I'm loving this. Today's letter (well, yesterday's or something) was to Federico. I don't know Federico very well. We've met a few times, but in a public setting rather than in a private one. I do know, or at least, I think I do know some things about him. Not so much personal things, but a bit how he ticks. Which makes writing a letter both easy and tricky. I wanted to avoid the topic we obviously have in common, but I didn't. It made too much sense to tackle it. 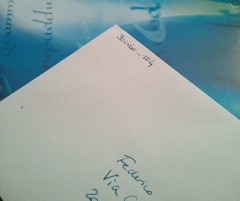 I wrote the letter in two parts (on the same day, but at a few hours intervall). Which brings me to reflect on time in letter writing. We've gone from having news travel for days before they reached their addressee to instantaneity in communication. You click, the other receives a ping wherever they are. Letter writing is obsolete almost as soon as you seal the enveloppe. Not so much the "art" of letter writing, but the content. Because while the letter is on its way through physical means, you've probably in some way or another have had a thousand opportunities to communicate with the person you sent a letter to. Letter writing is also asynchronous. Letters (if of course they go both ways), might cross each other, and answer questions you forget you have asked. Which is exacerbated by the fact that you "send" a letter in a physical way and usually do not keep a copy, which means there's much potential for forgetfulness (what question is my correspondant answering to? I don't remember what I asked!). Anyway, I'm back on track, hopefully. Next letter will be sent on Saturday, if everything goes well.

What's this about?- I'm trying to write 30 letters in 60 days (and some), it's all explained here