Using the logo, its shape and its colors over and over again for new projects logos, is in my opinion harmful for the identity of the Wikimedia Foundation. Well, at least, that's my official quote.

But the real deal is, that I find extremely sad that people cannot come up with distinctive logos for the different projects, and always fall back into the boring green/red/blue of the Wikimedia logo, or into some approaching shape that is always the same. Geez. I know it is hard not to fall back into the same visual identity over and over again, but I thought if Wikimedia contributors could come up with the Wikipedia logo, they sure can come up with some cool ideas to illustrate the other projects and give them the same kind of unique feel that Wikipedia has. I believe it is actually the only way that any project will earn its place within the wiki community.

However, in the few last rounds of logo contests the Wikimedia projects had, most of the logo proposals ended up falling into the same old trap...round, blue, green and red. Some had a little something, but in the end, they all looked the same. The Wikibooks logo proposals (destined to replace a sad clipart à la Micro$oft type logo) are still lingering within the circle and the Wikimedia colors. Heavens be thanked, Wikiversity seems to have managed to avoid the pitfall and have come up with a nice identity of their own and Wiktionary seems to be on the way there. 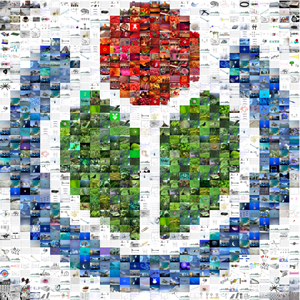 But to show that I am not completely obtuse when it comes to derivatives of the Wikimedia logo, I would like point ot one initiative that I find simply amazing. Brianna Laugher one of the most active contributors, on Wikimedia Commons, the media database used for all Wikimedia projects, came up with a great idea. Commons is reaching soon its millionth file and in order to celebrate the diversity of info found at Commons, she thought of "mosaic-ing" the Wikimedia logo[1] and recreating it with files issued from Commons. Brianna was helped in the first steps of implementation by Greg Maxwell and Larry Pieniazek, and the mosaic is now a truely collective work, being added to by all "commoners" who wish to give a hand. The result is simply grand.

One may ask why they didn't use the Commons logo. Well, my take is that it didn't allow for as much fun, seeing it's only two colours. And in the end, Commons is the common ground for all Wikimedia projects when it comes to media files, so it's defendable. All this to say that in the end, when people actually rack their brain and come up with simply fantastic ideas, I don't mind so much the Wikimedia logo being taken advantage of... Thank you commoners. This has made my day.

[1] Click on the image to see a bigger captured version, the file might change with time as it is supposed to reflect the evolution of the mosaic. The live mosaic can be found here © Wikimedia Foundation for the logo and © every single author of the xxxx images for the rest. [yeah, bad copyright enforcing habits die hard ;-)]