No seriously, I am extremely angry right now. I've installed KDE 4.2 a few days ago and so far, I am pretty happy with it. Mind you, it's not for the faint of heart and I still think it was a huge mistake to ship it with Kubuntu Intrepid, because it is way too advanced (or not enough, depending on how you look at it) for the basic user, but that will do for another post. 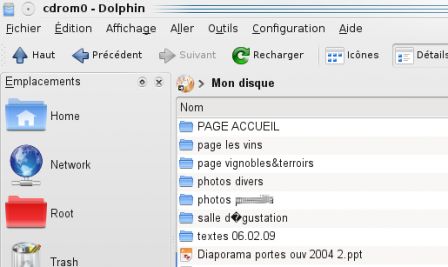 What makes me angry right now is another matter entirely. Yesterday I received a CD from one of my clients. On this CD, one of the folders has a French name, with special characters, "dégustation". The CD was burnt by my client, probably on a Windows machine. I try to open it today with Dolphin. The folder with the special character won't open. I try with Konqueror. The folder won't open. In short, it is broken. I try it on a Windows box, no problem, the folder opens perfectly.

So I look around to try and find a solution to open the CD on my machine, because I need its content. Seems the only way to do this in KDE 4.2 is ... command line [1]. So much for usability.

And while I look around, I end up on this page and this comment, which I reproduce here :

We will no longer support broken encodings in KDE. We have had transition code for several years (at least since 2003) and I think 5 years is enough time for people to finish transitioning to UTF-8 environments.
This bug is about broken-encoded files. *Properly* encoded filenames should be working and if they aren't, please open a new bug report on the subject.
You will hate me for this, but this bug is a WONTFIX. 5 years is enough time. If in 5 years you haven't renamed all your files, you should use the terminal to do it.

So. There is a technical reason (which I cannot understand, way too complicated for me) why this won't be fixed. Fine with me. What seriously pisses me off is the excuse given why this won't be fixed, namely 5 years is enough time for people to finish transitioning to UTF-8 environments.. I find the argument outrageous. Here are my reasons.

I take this example because it really hindered me in my workflow today, but I have encountered this kind of attitude many times over among Open Source advocates, in short, that people should just go along with progress and not look back. Well, guess what, I am an Open Source advocate, and I am also one of those basic users (ok, maybe a little more than that) who works close enough to the "everyday" user to have an idea of what people don't know and don't do. I will call my client and tell her that I couldn't open her CD straight away, and that she should maybe consider in the future not to use special characters because it makes for better cross-OS compatibility. That will be my little stone to the education of the general public into standards. Seriously though, I'll say that I'm on Linux and that it doesn't work. How does that sound? To me, pretty bad, and definitely not like a good advertisement slogan for Open Source altogether.

Basically, what I think we should be looking at here is not to "expect" anyone to have done "anything" that "makes sense", but look at ourselves and say if people haven't transitionned to UTF-8 yet, maybe it is our fault, because we haven't been good enough at communicating on standards and changes and progress. And failing at that will not get us, Open Source advocates, very far.

I think, for example, that Firefox and Open Office are a good example of a mix between "do with the broken" but also "teach people why it's broken and try changing their approach to these things". So yeah, the basic user might be really behind in their "transitionning", but that is where they are, it is the real world. And if we don't go looking for them, they won't come looking for us. To "do with the broken" does not mean "to further the broken", but it is a window of opportunity for us to teach people what good standards and practices are. And should be seen as such, not as a sign that everyone is behind, and we are soooooo ahead [2]

[1] Or through Nautilus, which I happen to have on my machine and which actually opens the folder, even with the broken encoding. Long live Gnome.

[2] [edit] I've just noticed that nautilus not only opens the folder, but does point out that the encoding is not valid, which is exactly the right behaviour, me thinks. Click on the image to see.